Despite strong market gains on Wednesday, March 4, 2020, the on-the-run 10-year Treasury yield ended the day below 1% for the first time ever and has posted additional declines in real time, sitting at 0.92% intraday as this blog is being written. “The decline in yields has been remarkable,” said LPL Research Senior Market Strategist Ryan Detrick. “The 10-year Treasury yield has dipped below 1%, and today’s declines are likely to make the recent run lower the largest decline of the cycle.”

As shown in LPL Research’s chart of the day, the current decline in the 10-year Treasury yield without a meaningful reversal (defined as at least 0.75%) is approaching the decline seen in 2011 and 2012 and would need about another two months to be the longest decline in length of time. At the same time, no prior decline has lasted forever and a pattern of declines and increases has been normal. 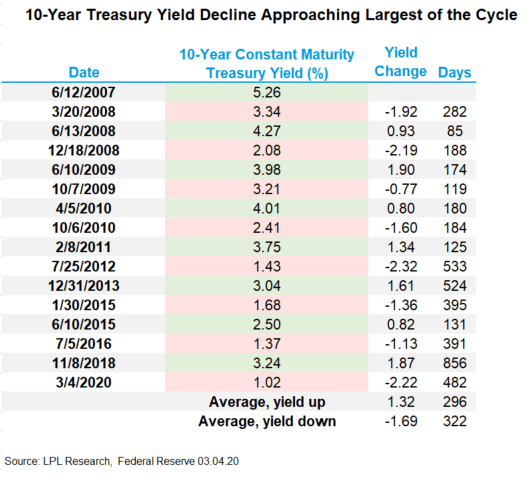 What are some things that can push the 10-year Treasury yield lower?

What are some things that can push the 10-year Treasury yield higher?

On balance, our view remains that the prospect of an economic rebound over the second half points to the potential for interest rates moving higher. At the same time, we still see some advantage in the potential diversification benefits of intermediate maturity high-quality bonds, especially during periods of market stress. We continue to recommend that suitable investors consider keeping a bond portfolio’s sensitivity to changes in interest rates below that of the benchmark Bloomberg Barclays U.S. Aggregate Bond Index by emphasizing short to intermediate maturity bonds, but do not believe it’s time to pile into very short maturities despite the 10-year Treasury yield sitting at historically low levels.