2020 is only five months old, but in many ways it is one of the most historic years we’ve ever seen. 2020 went from moving along nicely, to seeing the worst recession in a generation and the fastest bear market ever. Now stocks are in the midst of one of the best bull runs ever, even though the economy remains extremely weak, thanks to record stimulus and hopes over a vaccine.

1.) The 2010s were the first decade in history to go all 10 years without a recession, which of course ended just months into the new decade, as the economy stopped. Stocks gained 13.5% on an annual basis last decade, surprisingly, only the third-best decade over the past four.

2.) This is an election year, and the S&P 500 Index hasn’t been lower when a President is up for reelection since FDR in 1940. Although this seemed nearly impossible at the March lows, it is looking like this incredible streak could have a chance in 2020. 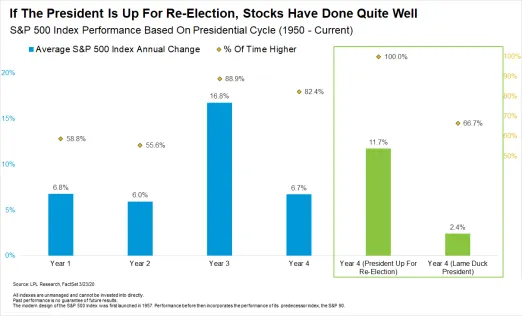 3.) One of the first signs something could go wrong in 2020 was stocks fell in January. Historically, this has meant potential trouble for the final 11 months. 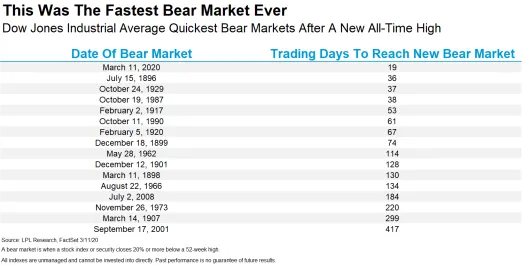 5.) Mark Twain said “History doesn’t repeat itself, but it often rhymes”. Looking at history, every 50 years there has been a terrible pandemic and stocks fell more than 30%. We don’t know if the ultimate lows are in this time, but so far, history is rhyming.

6.) More than 20 million people in the US lost their jobs in April, while the unemployment rate soared to near 15%, the highest since the Great Depression. Record drops in manufacturing, industrial production, retail sales, and consumer spending have all taken place in the past two months as well.

8.) The bounce off of the March 23 S&P 500 lows has been historic in many ways. In fact, it was one of the best 20-day rallies ever, with previous best rallies seeing strong returns 6 and 12 months later. 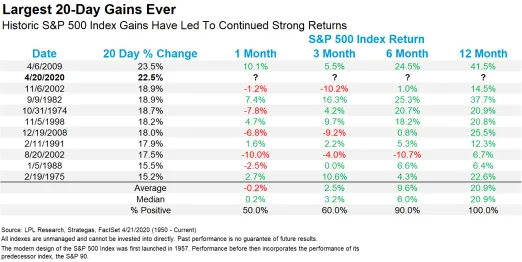 9.) As scary as it was on the way down, stocks have come roaring back, gaining more than 35% from the March 23 lows. This would classify as the greatest bear market bounce ever, which opens the question: is this more than a bear market bounce and instead the start of a new bull market?

10.) The number of COVID-19 tests in the US nearly doubled in May versus what was seen in April. Additionally, fewer and fewer tests are coming back positive. Testing is one of the key ways we will beat this and this is a step in the right direction. We’ve also seen new monthly lows in people on ventilators, in the ICU, and in hospitals.

Hard to believe, but there are still 7 months left in 2020. It hasn’t been easy for any of us, and we continue to keep everyone impacted by this pandemic in mind, but we continue to see the glass as half full. The dual benefit of record monetary and fiscal policy should help create a bridge to help those most impacted, while the economy can slowly come back online later this year.