It took a while, but the S&P 500 Index finally made a new all-time high, coming all the way back from the vicious 34% bear market in less than six months. 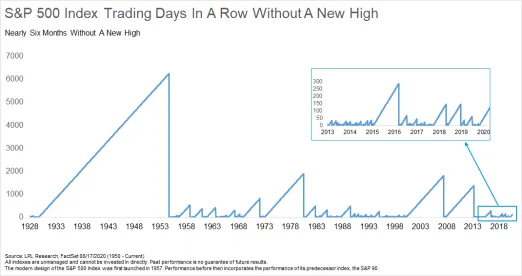 It might bring back some scary memories, but back in March it took the S&P 500 only 16 days to go from new highs to a bear market (down 20%), the fastest ever.

“This will go down as the fastest bear market ever, but also one of the fastest recoveries ever,” explained LPL Financial Chief Market Strategist Ryan Detrick. “Then again, we’ve never quite seen a recession and recovery like this, so maybe it isn’t a shock to see new highs this quickly.”

It seems like earlier this year and new highs were a lifetime ago, but the S&P 500 finally moved off unlucky 13, notching the 14th new high of 2020.

As shown in the LPL Chart of the Day, returns after a long time without new highs actually get better. One, three, six, and 12 months after the first new high in more than five months show stronger performance than average or after any new highs. Yet another reason to think that this bull market from a long-term point of view could have some more tricks up its sleeve.

Last, we found there were four other times the S&P 500 made a new high during a recession: In February ’61, July ’80, November ’82, and March ’91. Incredibly, a new expansion started the following month every single time. Could stocks at new highs be signaling an end to this recession? We think that very well could be the case again this time.