“An object in motion tends to remain in motion along a straight line unless acted upon by an outside force.” Sir Isaac Newton

Last September, we noted that gold had many structural reasons to soar. Well, soar it has, eclipsing the previous highs from way back in September 2011. Gold is up more than 28% since we published our LPL Research blog, Time for Gold to Shine? in early September 2019, easily outpacing the 7% gain from the S&P 500 Index over the same time period.

Think about this: 2020 is the first year since 1979 to have both gold and the S&P 500 make new highs during the calendar year. What happened the last time? Gold added another 17% and the S&P 500 was up 26% in 1980. It is widely believed that stronger gold likely means something is wrong in the markets and investors are more defensive, but it might not be that simple. 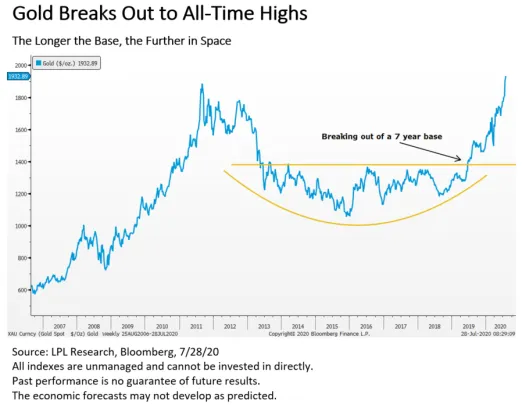 The US dollar and gold were linked until 1971 when President Richard Nixon ended dollar convertibility to gold, but since then, both gold and stocks have been higher 23 out of 49 years. Incredibly, in 12 of those 23 years, both assets were up at least 10%, with 2019 being the last time it happened. All of this suggests that the two assets can trend higher together, and it isn’t always a bearish development to see gold strong. In fact, we remain bullish on both stocks and gold here, as the two can trend higher together.

Although there isn’t one lone reason gold is back to new highs, there are at least 10 reasons why gold very well could remain strong.

“More than 300 years ago, Sir Isaac Newton taught us that an object in motion will likely stay in motion,” explained LPL Financial Chief Market Strategist Ryan Detrick. “There are many fundamental reasons to expect gold to do well, but maybe the easiest argument is that fighting an asset as it’s making new highs after nearly a decade without any new highs has been a losing fight throughout history.”

As shown in the LPL Chart of the Day, gold based for seven years and broke out late last year, ushering in the new highs we are seeing now. There’s an old technical saying that “the longer the base, the further in space,” and this played out quite well this time, as gold based for years before the surge higher. Technically, gold still looks like it will continue to do well, while fundamentally there are still many tailwinds. We remain bullish on gold in this environment.