Being an early investor in a popular company has an undeniable appeal.

The numbers can seem big, or even enormous: For example, if you had invested $1,000 in Apple when its stock first hit the public exchanges in December 1980, your investment would be worth around $430,000 today.

But those eye-popping results are a rarity. A recent UBS analysis based on data from a University of Florida professor found that most investments in newly public companies lose investors money after five years. Investing for the long term in a diversified mix that tracks the market is generally a much safer bet. Even with rough periods, over the past 90 years the average annual gain for stocks is 11.4%.

With companies including Uber, Lyft, Beyond Meat, and more making their long-awaited debuts on the stock exchanges this year, lots of investors are wondering whether it’s worth trying to get in on the action. Here’s what you need to know about IPOs.

The term you’ll hear for a company’s stock market debut is IPO, or initial public offering. Before a company has an IPO, its stock is not available for the general public to invest in. That’s the reason for the hullabaloo that generally surrounds this event—people are excited to finally be able to buy stock.

Companies generally go public so they can raise more money. “Companies go public for a variety of reasons, but primarily to raise capital, to provide liquidity for shareholders, and to establish a valuation,” says Kathleen Smith, principal at institutional research firm Renaissance Capital, whose products include IPO ETFs. “It gives the company a lot of financial flexibility.”

Investing early can be risky, and experts say it’s generally best to wait

With a calendar full of big-name companies planning to go public this year, it can be easy to get caught up in the fervor. But most financial advisors try to steer their clients away from flashy IPOs and toward more diversified investments. 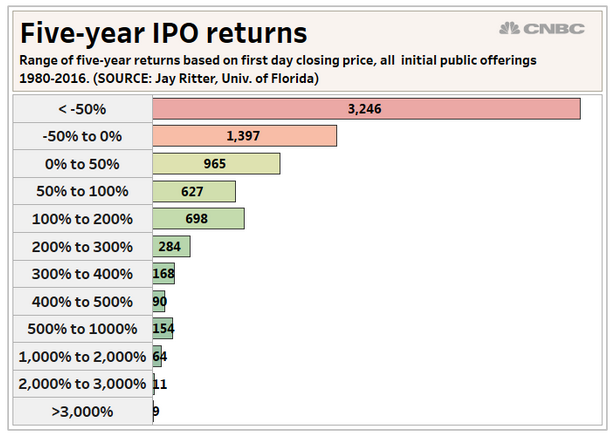 “It’s not in line with our approach to investing, so we’re not out there looking for the next great IPO,” says Jenifer A. Aronson, managing partner at Illinois-based Mosaic Fi. Aronson says that she doesn’t recommend that her clients invest in companies new to the exchanges—but if they insist, she asks that they carefully consider the risks, stick to a small purchase, and invest for the long run.

Don’t assume “that it’s going to quadruple in price in a month and then you’re going to get out of it,” she says.

Big rewards tend to require big risks, and that holds true when it comes to investing in IPOs.

Whalen says the firm asks its clients to undertake fairly rigorous research when they ask to invest in newly public companies. Investors should dig through the available data to look at a company’s earnings growth, whether it has a path to profitability and any existing competitive advantages.

“All of those things should be clearly defined in the IPO prospectus, which you can get in [a company’s] S-1 filing prior to going public,” he says.

Even doing your research won’t help you hedge all the risks associated with newly public stocks, though. And because of the iffy track records of these investments, most advisors say it’s probably a better idea to let the market have a say before you buy that individual company stock, if ever.

“Investors should avoid jumping in just because they hear an exciting IPO is coming,” says Smith. “You’re better off just ignoring what is happening.”