Like other areas of the economy, the finances of states, counties, cities, and towns have been heavily impacted by efforts to contain the COVID-19 pandemic. The disruption has raised concerns for municipal bond (“muni”) investors. As shown in the LPL Chart of the Day, municipal bond yields, a measure of risk, have started to rise again compared with similarly dated Treasuries after looking like they were trending downward. 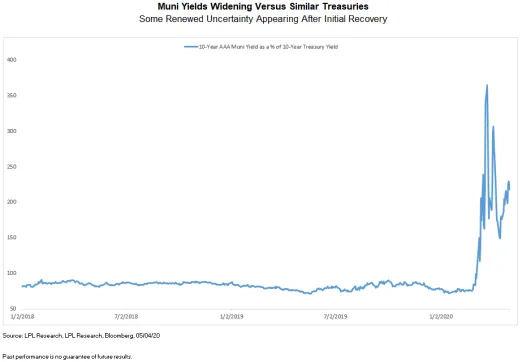 “Municipal bond investors are concerned and rightfully so,” said LPL Financial Chief Investment Officer Burt White. “And state and local governments are facing nearly unprecedented challenges. But the good news is the federal government and Federal Reserve (Fed) have stepped up to help see municipalities through this crisis.”

Municipal bond yields spiked early in the bear market, as a move to safer Treasuries along with illiquid conditions pushed muni bond prices lower and yields higher. Fed intervention to support muni markets did help to take some of the pressure off. The federal government’s CARES law also ear-marked $150 billion for municipal costs associated with the COVID-19 response, increased existing grants, and created a new loan program. Significant added federal government support for municipalities will likely be a major part of the next stimulus package, but the size and the scope of any package is still the subject of debate, and is likely one of the catalysts behind the relative yield’s recent move higher.

Contrary to other parts of the bond market, the Fed is not buying municipal bonds in the open market, but it’s doing a few things to support municipalities directly and the municipal bond market indirectly.

While municipalities, like the rest of the economy, are facing an extremely challenging period ahead with budget shortfalls and spending cuts likely, we think current federal programs and likely added support to come, on top of “rainy day” funds set aside for just these types of circumstances, will help see the municipal bond market through the economic slowdown. There will be isolated defaults, but we believe the overall market will return to normalcy over time.

The good news is that while higher yields come with higher risk, they also have higher return potential, which can create attractive opportunities for tax-sensitive investors, since income from munis is often exempt from federal taxes as well as state taxes in the state where they were issued. But with municipal finances highly differentiated, active management may be especially important, both for building a relatively safe, diversified core for a municipal bond portfolio and for finding potential opportunities.