2020 has been historic and devastating in many ways, from the fastest bear market ever, to one of the greatest stock market recoveries ever. Not to mention a historic drop in the economy in the second quarter, with likely a record jump due in the third quarter. With so many things happening, it is easy to forget this is also an election year. As we inch closer to the highly anticipated vote, we expect more focus to move to November 3.

Here’s the catch—stocks very well could be one of the best indicators to show who will win. “It is actually quite simple; when stocks gained the three months before the election, the incumbent party tended to win and vice versa when stocks were lower,” explained LPL Financial Chief Market Strategist Ryan Detrick. “Think about 2016 for instance; no one expected Hillary Clinton to lose, except the stock market that is, as stocks were quite weak before that upset.” 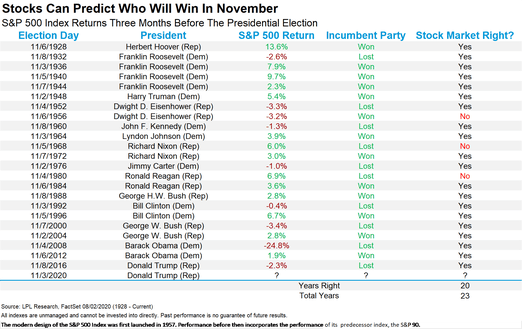 Given the election is three months from today, the clock starts now. But why has this worked in the past and what could it be telling us? Maybe Wall Street can sense there is change in the air and this leads to uncertainty over what the new leadership might look like, so there is selling. Compare this when markets feel comfortable with the incumbent party winning, as they likely know what to expect based on the previous four years.

As shown in the LPL Chart of the Day, how the S&P 500 Index has done the three months ahead of the election can predict who will win the election in November. In fact, stocks have accurately predicted the winning president every year since 1984 and been right 20 out of 23 of the last elections (87%).